Making our own hard-modes.

I would love some suggestions running out of books to read!

Here probably isn't the place for my opinions on books, but just a quick one: Read The Bone Doll's Twin (and sequels) by Lynn Flewelling. Coppelia can vouch for their sheer levels of awesome! 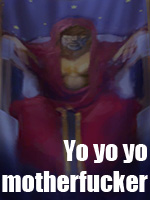 As I never want to dissuade avid readers, here you go - I've now set up The Reading Room, for discussions about books.

So I shall do as the topic says and say Hello.

Hi there! I'm Jath, but as you'll soon find out I get called J/Jakk most of the time, I'm a 19 year old gamer from England who's been playing MMO's for the better part of 5 years, starting with Guild wars (and fighting my sister for use of the one and only PC in the house) and eventually ending up on WoW. I'm currently at Newcastle University doing Geography. When I'm not nerding it up on Warcraft, I like drinking excessive amounts of alchohol, losing brain cells via playing rugby, blogging/writing little RP things about my alts (blog link is in my forum signature), reading, playing the drums and generally keeping myself entertained. That's me, in a nutshell.

Hi all, my name is Nightprowler but I'm mainly known as simply Night by my friends and guildies.
I've been playing WOW for about 5 years now and enjoying every minute of it, before WOW I played Guildwars for a while and a little EVE. Prior to playing these MMORPG games my early on-line experience was with Freelancer that awesome game from Anvil and Microsoft and that game I played for about five years on many small privately run servers and in those days I was known as Gremlin (Grem)

. I have quite a few chars on WOW Night is the main followed by Rifraf then comes Popegrem, Badmedicine & Gremdina.
Thats enough gaming background on me so hope to play with you guys for a little raiding and socialising.

Thanks for reading this & good luck in-game,

Night,
Good to see you on the forum. See, we don't bite!
There's a lot of chatter, but its mostly harmless. Keep an eye on the Scheduling thread, and we'll see if we can sort you out a raid or two!

Thought I'd post a hello as I'm now in the guild.

Been playing WoW since release in a variety of guises, am an ex-server first burnt out raider looking for a more laidback and fun approach to gaming.

I'm going back to university next year to study Archaeology (yay! mature studenthood!) and I'm getting married in a few months (aiiieeee! stress!).

Looking forward to grouping with you guys, had a fun run through UK and Nexus last night with Malicht and Coppelia, so nice to play with competent people!

Anyway, see you in game! 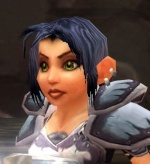 Night, welcome to the forums, there's all sorts of bizarre stuff to be found here. Mostly cake and gnome related.(Advice: concentrate on the former, and don't look at Colt's avatar if you can help it.)

Rhizzo, welcome, glad you made it! Looking forward to meeting and grouping properly tonight. (Yay, Kara!)

I'm new to the guild, (hopefully soon to be) new to raiding and (relatively) new to Warcraft. If Wowwiki is correct, then I've been playing since 4 August 2009, the day 3.2 launched -- I know this because I'd been too tired to play the night before after the interminable install and patching, and I then had to wait for another enormous patch to download and install before I could log in. If you're struggling to sleep, you can read a long and boring account of this. My previous guild didn't really raid, so my experience in that regard is limited to a weekly (Sartharion), the Spider Quarter of Naxx and a few level 60 and 70 fun runs.

I've server-transferred two characters over from Nagrand: Centrella, a mage, and the probably-due-for-a-name-change Theanorak (Ano), my ret paladin main. Tremble -- a terrified DK shaking his way through the starting area -- will be my banker if he can get to Stormwind, where I have clean trousers waiting for him.

Warcraft has claimed an increasing amount of my free time since I started playing last year. I read an alarming number of WoWblogs, and have even taken to writing one myself. I've been a keen gamer for a long time, and can bore at length on a number of gaming-related topics.

Interests outside of gaming include travel, whiskey (sometimes combined with gaming) and most things I can do whilst prone or holding a beer. I would put in a disclaimer about verbosity but I guess that's self-evident, and doesn't seem especially out-of-place here! I'm looking forward to experiencing a bunch of new (to me) content with the right kind of people, and learning all the things I should probably know by now but don't. See you there.

A very warm welcome to you, Ano, to both the guild and the forums. We're very happy to have on board - and not just for your replenishment, I promise. And never fear verbosity as far as Enthusiasm is concerned. We like walls of text almost as much as we like cake.

And don't worry about the newness - we're very much about learning together as we go.

And if you have specific questions about the light and how to swing it, the best person to talk to would be Wreen, our resident sacrificial hitty-and-healydin.

Thanks for reading the reply and having a look here - I'm delighted that you like what you see! We'd be very happy to have you on board - to be honest, what you wrote in your initial post, and what you've written here reminds me of some of our other wonderful members.

We're about every evening, so if you want to roll up a level 1 alt on the server and have a chat with us before joining, you'd be quite welcome, otherwise....welcome on board!

Mattias (it can't be long until we all nickname you "Sun"), I'm glad to see you here! The moment we saw your searching post, we felt that you may be a perfect addition to our little family here. Sometimes, some things are hard to put in words, sometimes feelings are hard to explain. But something about the way you described yourself spoke for itself, saying "he's one of us!". And now you reinforced that impression even more. We'll be happy to greet you in our middle. If you wish, you can make a new character to get in touch with us, we should be about from roughly 7:30 server time. We'll have another chat in-game where we can ask each other everything we want to know

And if your decision is already made, we'll eagerly await a whisper from a sweet dwarf lady called Sunesynfel!

Thanks alot for the great response.

I've heard rumors about 2 new heroes arriving in dmf shortly.
They will probably come knocking on your door....

looking forward to meeting you in game Mattias

Fantastic news and welcome to Enthusiasm.

Drinks at the bar, nuts are all over as an old friend of mine used to say

Ah. More swedish folks. Great. Soon we can change our official language to swedish during raid. Would love to hear Colt scream out dps targets in swedish

okay I'll head back to my box now.

Some Cake for you all

I thought it apt that I make my first post here. I'd like to thank Tam And Alquiel for my guild invite/recruit membership, and then everyone else who made it such a warm welcome! I will bring cake to the next catch up

Just incase some of you didnt meet me ingame tonight/or did, but thought it best not to find yourself soaking in my walls of waffle, i'd like to tell you a little about myself.

Been playing wow for easily over a year, probably 2 to 3 on and off. I have a record breakingly low amount of level 80 characters for this period, summing the grand total of one. The main reason for me accepting the rather generous invite to this guild was two fold. Firstly it was offered by Tam, why this is a good thing escapes me is due to him being quite an inspiration to me, especially in his rather awesome blog. The second reason being that the realm I was on, all my friends have recently decided to move back to their gaming origins, which is FPS, so the guild I was in pretty much dissolved. No sob stories though, i don't need hugs...well maybe one or two.

A quick server change, and a faction transfer, and I've arrived.

Ok, I'm 26, male, and live in cambridge. I work in I.T. and pretty much have stupidly wavey working hours, generally doing 12-14 hour days. My girlfriend is also 26, however is less enthusiastic about games than I, so sticks to her facebook, and prefers me playing WoW than FPS guns in your face games.

Ok, so my main (singular) is a rogue, I am completly and utterly quite new to the whole prospect of actually doing raids. The challenge is an exciting one, however since you could call me a noobito in this area, any advice I will gladly absorb asap.

ok it's late so I shall stop waffling, thanks again for the invite, hope to catch up with you soon!

welcome aboard, looks like I picked a busy night to have off for curry noshing

See you in game,

Heya Rhizz! we can haz Kitty druid as well Solarwind joined last night, I was laughing everytime he would back up and fly over our heads to attack the bosses... Flying Ninja Kitty FTW!

Was lovely to talk and run a heroic with you - am really looking forward to us introducing you to raiding with us too!

Rhizz, yes, you missed a busy night, we've got a few new and lovely faces here with us. And I can't wait for us all to be in there and doing stuff! But mmmmm, curry.......

*hugs and cake all round*

Salvaenus wrote:Heya Rhizz! we can haz Kitty druid as well Solarwind joined last night, I was laughing everytime he would back up and fly over our heads to attack the bosses... Flying Ninja Kitty FTW!

Hello to you all

Hello.. I am Known by couple of names... my given name is Elaine but I have been called Lizzy for as long as I can remember by a lot of folks. I hail from the wonderful place called Nottingham and yes it is Robin Hood country and Sherwood Forest really does exist its about 4 miles up the road from me. Solarwind and I are married and we have been gaming for a lot of years (not gonna say how many I may have to kill you after). Well thats all I think you need to know unless your making moves on either me or solarwind...lol. I am looking forward to playing with you all so much and I hope as my confidence returns you will see I am a nice person really *coughs* Honest.